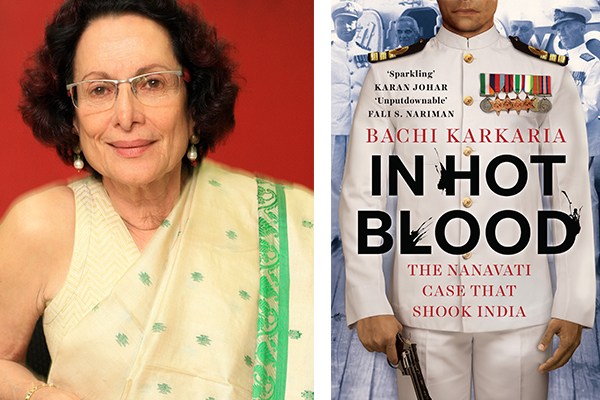 I have not watched a single one of the Nanavati murder trial and ménage-e-trios inspired movies, not have I ever been remotely curios about this so-called national sensation. Yet, after this book came out last month my book club decided to go for it. That compulsion, rather than the topic made me read it. And it turned out to be more than worth the time and effort. An enjoyable, educative and thought provoking read, in so many ways this turned out to be.

Bachi Karkaria has gone through exhaustive and extensive research to make the story richly detailed, in-depth, and almost a full sociological treatise on the times (1950-60) of the events, their background, context and aftermath on various aspects of the nation’s judicial systems and particularly Bombay’s socio-cultural life. From interviews with those who were around in those times, and those who can tell us something new as well as retell the old facts, she presents a fresh look at one of the most talked about murder cases in the history of modern India. Not a simple task, this, which Bachi carries off with élan.

The facts are supposedly known to everyone, but I will recap. Kawas Nanavati is being cheated on by his wife, Sylvia. She confesses to the husband, and tells him to be careful – she fears for his life as her lover, Prem Ahuja has a gun. The shattered husband is a naval commander. He too can get a gun. Which he does. And he then goes to confront the lover- to ask him what his intentions are, and if he plans to do the honorable thing by marrying Sylvia and taking care of the children. Kawas is seen going to Prem Ahuja’s room. There is no witness to what happens inside. Three shots ring out from behind closed doors. Nanavati walks out, his white dress unblemished and surrenders himself to the naval police for having shot a man. Ahuja is found dead with gun shot wounds.

In court, Kawas pleads not guilty. On purely circumstantial evidence the jury too calls him not guilty. Throughout the trail, Nanavati is the hero of the masses and the media. The jury system earns its nail in the coffin with this case and is never used again in India. Nanavati is found guilty on appeal, but again pardoned by the state governor.

These are the facts. But behind them lies a fascinating maze of coincidences, manipulations, prejudices, class and community networks of allegiance and privilege. Partisan media uses its power of mass opinion making, and forgets journalistic neutrality. The Blitz goes all out to defend Nanavati and runs petitions for him. How did all this actually play out? What factors could have worked behind the scenes to move which levers? Why was murder not seen as murder but a point of honor? What made Nanavati the hero he seemed to be viewed as? What made Sylvia not a vamp but an object of sympathy or even indifference? What made Ahuja a villain who no one shed tears for?

All this and more is the focus of Bachi Karkaria’s elaborate delving into this old story. Her recreation of the Bombay of the late 50s is picture perfect, in all details. The courts, the Navy areas, the localities of posh Malabar Hill, the cinemas, the markets, the streets all come alive as if a movie runs in real time. The dialogues, the imagery, the aura and ethos of the communities that play the main roles are all vividly and precisely depicted.

The writing does get over the top at just a very few places, in typical Bachi style, which I (in a case of absolutely subjective aesthetic preference) found a tad out of place in reading a serious book of investigative/reconstructive journalism, but I can’t say it took away much from the book. For a case as sensational as this, hyperbole and drama is part of the territory in the retelling. Bachi manages to keep the drama alive while she remains almost clinically detached in the retelling. Nothing is assumed or taken at face value, and the alternate possibility is considered and the alternate voice is given a legitimate place. Through it all if the author tends to lean towards anything, then it is to constitutional values and the spirit of constitutional law, and a sense of fairness and open minded questioning.

It can tend to feel repetitive and maybe slow reading for those looking for the more juicy kind of sleaze and gossip, but that is not the author’s intention, though she does not shy from presenting all of those facts too.

After all the points of law and constitutional propriety and Naval and Parsi privilege are debated and understood, the book still leaves me with the biggest mystery unsolved. How does a couple pick up the shot to hell pieces of their relationship after a man is killed in hot blood, over the matter of the wife’s infidelity, and go on to build a new life? The author does reveal a lot of factual details of the Nanavati’s life after their move to Canada, but those chapters lack the insights and depth of the proceedings of the trial, or of the context around it.

How did these people later forgive each other, if not totally forget the tragedy? I guess that will remain for us to guess and for them to know. Or food for another book.

A sociologist by education and sensibility, with years of experience as a qualitative market researcher. Now a writing facilitator, freelance writer, sustainability advocate.

Whats been lately on my mind

Back to top
Smoke Signals

A psychosythesis approach to living

"A Word of Substance"

Rebelling against a culture that values assimilation over individuality.

A Little Bit of Everything and a Whole Lot of Nothing....Politics, Entertainment, Movies, Gossip. What's Life, if you can't see the humor in it. :)